Photo: Protesters behind a burning vehicle in Viña del Mar

This year’s opening of the annual Viña del Mar International Song Festival was met by hundreds of militant protesters who delayed its start with combative street battles that damaged property and injured police officers, showing that the mass rebellion in Chile persists months after metro fare hikes in the capital of Santiago ignited protests in October 2019.

Taking place between February 23 and 28, the Viña del Mar International Song Festival is recognized as one of the largest and most important in Latin America and serves to promote the tourist industry within the city of Viña del Mar and surrounding areas. The festival reveals the contradiction between the poverty conditions the Chilean people live in and the lavish lives of the Chilean ruling class.

The day of the festival, rebellious masses from the many slums surrounding Viña del Mar came into the city to expose the starvation conditions they face in contrast to the decadent excesses of the festival. One sign at the protest read “Viña has a festival and in Chile there is no money for bread.”

In a video from Chilean bourgeois media outlet, El Tiempo, some well-off festival attendees are seen shielding their faces as they entered the event, presumably ashamed of their wealth and afraid they may be targeted for it.

Eventually the anger of the protesters boiled over, and they crossed the security perimeter for the festival. Carabineros (Chilean military police) brutally attacked them in response, but the protesters heroically withstood the assault and valiantly fought back, ultimately injuring 23 carabineros.

The protesters set fire to several cars in dealership parking lots, broke shop windows and doors, and specifically targeted the nearby municipal building and the luxury O’Higgins Hotel where the performers and bourgeois journalists were housed. The Carabineros had to use armored vehicles, water cannons, and tear gas to block the protesters from storming the hotel.

The opening of the Viña del Mar International Song Festival is usually one of the most viewed television events in Chile, but the protests halted the opening act by forcing an evacuation of the O’Higgins hotel. When the show finally began, Puerto Rican performer Ricky Martin stated that he was, “with you Chile, never silent, always with love and peace.”

Prior to the event, Martin had condescendingly commented on the protests, saying that it was “important to let the leaders of our countries know what we need, provided we do so in an orderly manner.” Martin claims to uphold the people’s words while condemning their actions in a blatant attempt to quell the rebellion he rightly fears.

As of 2020, Martin had a net worth of $60 million, his wealth placing his interests squarely with the ruling class. Other responses from performers included similar opportunistic shows of support coupled with pleas for nonviolence, only proving that the festival serves the bourgeoisie, who are happiest when the masses peacefully accept their oppression and exploitation. Violent mass protests like the one in Viña del Mar, on the other hand, make the ruling class tremble.

As the general crisis in Chile leads to more and more unbearable conditions, the Chilean people will continue to rebel against those who side with the ruling class and all enemies of the people. Their heroic struggle is only reaffirmed as they are denounced by bourgeois politicians and musicians. Those who are most destitute prove to the world that it is right to rebel. 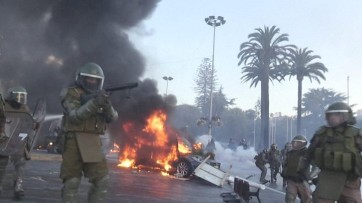 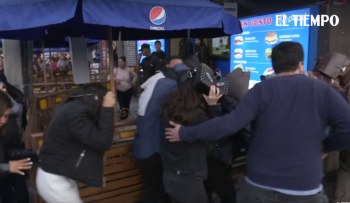