The firefighter’s union (SDIS-CFTC) joined the general strike on January 25 to protest for better working conditions, hazard benefits commensurate with the dangers they face, and adequate staff levels in response to regular understaffing. 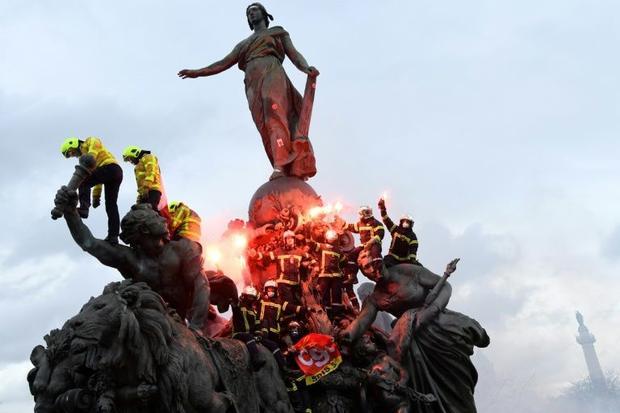 Firefighters filled the streets of Paris and marched from Republic Square to Nation Square, eventually climbing onto the city’s statues. The protesters ignited flares and many self-immolated only to have their fellow workers extinguish the flames in a symbolic demonstration of the hazards they face daily.

It was not long into the demonstration when the crowds of uniformed firefighters were met with riot police and their violent crowd-controlling tactics. Police used water cannons, tear gas grenades, batons, and riot shields in an attempt to disperse the protesters.

The firefighters took to a side street where a crowd of riot police were waiting for them on the other end. Not intimidated, they charged at the police and began to attack them with fists and thrown projectiles. Ultimately they were unable to break through and both crowds retreated from the engagement.

The demonstration was the latest in the general strike initiated on December 5, 2019 by over 30 unions. The strike has paralyzed services throughout the country and is attempting to force Macron to revoke his proposed pension reforms. On the first day of the strike Paris was forced to close off the Eiffel Tower, the next day hundreds of flights were cancelled and a majority of the country’s light rail lines were shut down until December 8.

The strike has been effective in shaping public opinion towards Macron’s reforms, with one poll showing 75% of people seeing pension reforms as necessary, but only a third believing the government could effectively carry them out. A more recent poll following the weeks of protests has shown that 66% of French people see the movement against the pension reform as justified.

Macron’s reforms seek to overhaul the current pension system, which varies across 40 sectors, and establish a system that allots points for each working day towards a worker’s future pension. Workers’ salaries would determine the point values, exacerbating the current inequality between different industries and making retirement even more uncertain as they can fluctuate over time.

The plan for pension reform also includes raising the age that workers can receive full pensions by two years, forcing workers to accept reduced payouts if they retire before the age of 64. French Prime Minister Eduard Phillipe attempted to walk back this proposed change in January after weeks of combative street protests, however the withdrawal has failed to stop the ongoing strike.

As the French state faces the deepening crisis of imperialism, the ruling class has attempted to keep a sinking ship afloat by forcing austerity measures on the workers. Under the proposed system, workers will work longer for reduced benefits and face greater uncertainty when approaching retirement. The current pension crisis exposes the failures of European social democracy, while the proposed technocratic ‘solutions’ have only further aroused the anger of the masses who have taken in streets in a defiant stand against their imperialist government.