Photo: Activists and Tenants protest outside the home of slumlord Charles Quarles

On January 12, Tenants and activists from Serve the People-Los Angeles’ 28th St. Barrio Committee held a demonstration in front of the slumlord Charles Quarles’ home.

Right before Christmas on December 23, the tenants of the 28th St. Barrio Committee received a “pay or quit notice,” demanding that they pay the rent which had not been collected and an additional charge. As of January 6, they received a five-day notice. While Charles has attempted to threaten the tenants during the holidays, they have remained united and undeterred. 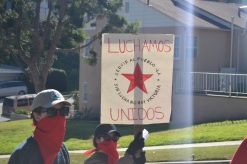 The action began in the afternoon with a group of activists taping up flyers with Quarles’ face around the neighborhood, exposing his attempts to evict working class tenants, as well as providing his address and phone number for people to express their outrage directly.

As tenants and activists approached his home, which is guarded by a large gate, they began to chant “Charles Quarles, You can’t hide!” Nearly everyone attending was carrying a poster or an image with his face, as well as two banners which stated “Slumlord Charles Quarles Lives Here” and “Combatir y Resistir Desalojo” (in English, “Combat and Resist Displacement”). Activists and tenants also used matracas (a noisemaker also known as a “ratchet”), making a ruckus to bring the attention of Quarles’ neighbors to the protest.

Activists propped up a speaker in front of Quarles’ driveway to amplify speeches. Whenever his name or the rent hike were mentioned, the crowd booed loudly. One masked activist stated, “He claims to be helping the community, yet he is displacing black and brown working class families!”

Soon after tenants began to chant “Charles Quarles, no somos animales, somos inquilinos con necesidades! (“Charles Quarles, we are not animals, we are tenants with needs!”),” referencing how he has called the tenants of 28th St. “animals” in the past.

One tenant, Sandra, approached the mic and gave a short, but fierce statement, connecting the displacement of working class people to the larger system of capitalism. She finished off with declaring, “La unión hace la fuerza! (Unity makes strength!)” 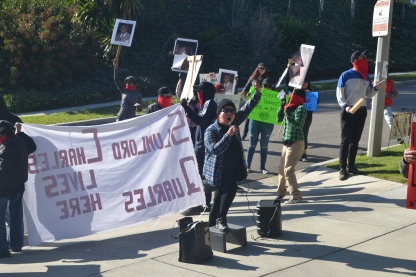 Another tenant, Robert, followed by giving a speech in which he loudly proclaimed, “You [Quarles] say there’s no money, no budget, but look at where YOU live!” Quarles lives in the wealthy neighborhood of View Park Los Angeles, generally known as a Black bourgeois neighborhood. In fact, he had even hosted an event for the imperialist and former President Barack Obama at his home. Clearly, Quarles is not struggling to make ends meet but trying to find ways to accrue more wealth with his current properties.

All while this was going on, a contingent of activists were half a block down, taking up most of the street at the corner with banners, agitating with flyers to passing cars and community members about how Quarles’ attempt to evict working class tenants, with many people being sympathetic.

Tenants and activists continued with their chants and one masked activist threw a dead rat on a rat trap on Charles driveway. From here on out, activists began putting up posters on his gate as well as a banner. Others had put up picket signs across the street with his face. After about an hour the protest had finished, and tenants and activists chanted “We’ll be back!”

While slumlord Charles has attempted to scare the tenants through eviction, they came back fiercer and will continue to intensify the struggle.