Photo: Protesters set fire to a reception area at the US Embassy in Baghdad, Iraq

6,000 protesters who had been rallying outside of the US Embassy in Baghdad in retaliation to US airstrikes in Iraq and Syria over the weekend finally withdrew this morning. The protests included several Shia militias.

During the protest, several dozen participants broke through the outer gates of the US Embassy, setting fire to a reception area at the heavily fortified 104-acre complex and chanting “Down, Down USA!” Protesters also broke windows, sprayed graffiti, and set at least one guard tower on the perimeter of the complex on fire earlier in the day. 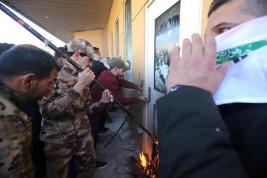 US military personnel responded by firing tear gas at the protesters in an attempt to disperse them. The US has sent hundreds of additional troops into the Middle East in response to the incident.

The action was carried out after US airstrikes in Iraq and Syria killed 25 fighters from Kata’ib Hezbollah, a Shia militia that US officials claim is backed by Iran. The airstrikes were in retaliation for an attack in Kirkuk, Iraq that resulted in the death of a US military contractor as well as several injuries of US and Iraqi troops on Friday. Kata’ib Hezbollah has not claimed responsibility for the attack.

Kata’ib Hezbollah is formally part of the US-led coalition fighting against ISIS, known as “Operation Inherent Resolve,” but it has also allegedly been firing mortars and rockets at US positions within the country for months, putting the US-backed puppet regime in Iraq in an increasingly difficult position.

US officials claim that the airstrikes were “precision defensive strikes” against three of Kata’ib Hezbollah’s weapon storage and command and control facilities in Iraq and two more in Syria. After the airstrikes, the militia responded by saying “Our battle with America and its mercenaries is now open to all possibilities.” The statement also stated “We have no alternative today other than confrontation and there is nothing that will prevent us from responding to this crime.”

The Iraqi puppet government’s foreign ministry responded to the airstrikes by saying, “We stress that Iraq is an independent country, and its internal security takes priority, and serious attention, and will not be allowed to become a battlefield, or a route for launching attacks.”

In response to the denunciation from Iraqi officials, assistant to the US Secretary of Defense Jonathan Hoffman stated, “The US and its coalition partners fully respect Iraqi sovereignty, and support a strong and independent Iraq.”

“The U.S., however, will not be deterred from exercising its right of self-defense,” Hoffman said.

The dueling statements from the US and their lackeys indicate a deepening fissure between them as well as an escalation in the proxy war between the US and Iran. This comes as ongoing protests against the puppet government in Iraq have forced the resignation of the Prime Minister Adel Abdul Mahdi and seen a brutal crackdown from police, resulting in the deaths of over 500 and injuries exceeding 19,000 (as of mid-December) since the protests began in October.

While US officials are quick to paint protesters as Iran-backed agitators, the protests demonstrate that the lackeys of US imperialism leading the country have lost any semblance of legitimacy in the eyes of the masses. Although they’ve denounced the airstrikes with calls for respecting their “sovereignty,” the Iraqi government has been completely dependent on the US for their ascension to power. They are capable of doing little more than pleading with the US to maintain the appearance of sovereignty, obscuring their role as servants of US imperialism and their country being used as a base for US military operations in the Middle East.

Similarly, the US claims of “self-defense” ring hollow considering the fact that all the US personnel targeted are affiliated with the imperialist military operating on foreign soil, initiated by the US invasion of Iraq in 2003.

As protests in Iraq continue to ramp up against puppet government leaders and outposts of US imperialism, the oppressors will likely respond with more repression, inciting the masses to more violently rebel.