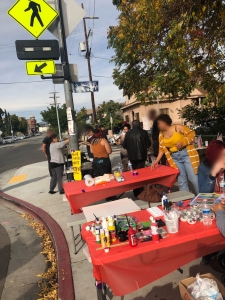 Last Saturday, a sidewalk lunch fundraiser was held in Boyle Heights, Los Angeles to provide support for two working-class, immigrant tenants in an effort to alleviate their medical and utility bills as they struggle against the property management company trying to evict them. Carlos and Lourde’s struggle has received support from revolutionary anti-gentrification organization Defend Boyle Heights (DBH), who helped them draft a list of demands and joined them to deliver them verbally and in writing at the property management office.

Tacos and drinks were sold to raise funds for the couple’s mounting medical bills due to Carlos’ leg injury and Lourdes’ high risk pregnancy, as well as utility bills the couple had fallen behind on. The support from the community grew larger than expected and organizers hurried to buy more meat to provide enough food. Many who came out in support left their information and expressed interest in organizing against the issues they are currently facing.

Carlos and Lourdes had reached out to activists shortly after receiving a three day “pay or quit” notice from 308 LLC, their property management company, which delivered the notice to the tenants shortly after rejecting their late rent payment.

Carlos has been out of work due to a workplace injury, causing the couple to fall behind on rent and forcing Lourdes to go to work during a high-risk pregnancy. Property management originally agreed to accept the late payment but when the tenants attempted to pay, the office was closed. Their payment was rejected shortly afterwards in a second attempt.

This is not the first issue these tenants have had with the property management company. Carlos has been acting as an unofficial superintendent for the building without compensation. In addition, the property management has refused to deal with pest problems, leading the couple to become ill from rodent droppings in their food.

Leading up to the fundraiser, Carlos and Lourdes canvassed alongside activists speaking about their struggle, the effects of gentrification, and other tenant issues. Their message resonated with the surrounding community who shared many of the same issues and concerns.

On the day of the fundraiser, multiple tenants from surrounding buildings came out to support their neighbors in struggle. Tenants in a nearby building supplied power to speakers and the front of the property was used to host the event. One tenant, a young woman named Amy, spoke with DBH supporters about how she is a domestic violence survivor living in filthy conditions where all tenants have to share a communal bathroom covered in feces.

Angela, a tenant that came from another neighborhood undergoing gentrification, spoke with supporters about how her landlord is also rejecting her rent payments. Her landlord directly told her he was seeking out higher-paying tenants to take her place.

As the event concluded, the tenants were seen at the top of the apartment building, where they made clear their intention to struggle against those seeking to displace them, dropping a banner from the roof with the call to action, “Combate y Resiste el Desalojo (Combat and Resist Eviction)!”