Photo: Tenants and activists protest outside of slumlord’s home

The morning of November 2, tenants and activists rallied outside slumlord Lara Washington’s mansion to confront her about deplorable living conditions and present their demands.

The President of the Allegheny County Rehabilitation Corporation (AHRCO), Lara Washington managed the DeRaud street apartments in the Hill District of Pittsburgh, where a fire recently displaced over 70 tenants. The fire was caused by electrical problems that tenants had reported multiple times but management refused to repair. The tenants’ demands include the right to return to the Hill District as management is trying to relocate tenants to other parts of the city far away from workplaces, reparations for the damages caused by the fire and tenants’ displacement, and livable housing conditions.

A speaker from revolutionary organization Serve the People – Pittsburgh (STP-PGH) opened the rally with the chant, “What do we have? Nothing! What do we want? Everything!” A speech was also given connecting the housing struggle to capitalist oppression and the necessity of making revolution to overcome slum conditions.

Tenants then gave speeches exposing Lara Washington for the inhumane conditions they had suffered. “You wake up to make your kids breakfast, and there’s rats crawling over the stove,” said one tenant. “I know someone who’s trying to potty-train her baby girl, and there’s mold in the bathroom.”

AHRCO tenant Devin spoke of his experience with AHRCO trying to evict him after the apartment building had burned down and was condemned: “How they gonna evict you, and you can’t even live there?” he asked. “That goes on your record! Shame on you, Lara Washington!” he added, to which protesters chanted “Shame on you! Shame on you!”

Protesters also took up chants highlighting the miserable conditions they have suffered, like “Roaches, mold, and mice, we ain’t asking nice!” and “Holes in our floors, bring it to their doors!”

In the days preceding the rally, STP-PGH had received multiple phone calls from the office of Councilman Lavelle, who was responsible for the Hill District area. His representative had called asking to negotiate and to call off the rally in the meantime. Instead of getting caught up in the backroom bureaucracy of politicians, STP-PGH ignored the phone calls and went ahead with the rally. 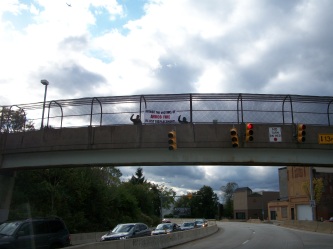 The rally demonstrated the power of solidarity and organization among the working class in the face of politicians and police. A tenant who has been experiencing problems with a different slumlord put it best, “We’re not afraid. We’re not just going to sit here, living in squalor.” Previously quiet, her voice rose in determination, “there will be consequences. We’ll hit them back!”

The rally concluded by promising slumlords not to get comfortable: “We’ll be back! We’ll be bigger!” protesters chanted, as they planted signs in Lara Washington’s yard labeling her an enemy of the people.