Over 50,000 people including President Donald Trump attended the “Howdy, Modi!” rally last weekend, welcoming Indian Prime Minister and Hindu fascist Narendra Modi to Houston. Over 12,000 more protested outside, mainly against the recent revocation of the Kashmir region’s special status, and the subsequent military occupation and repression of its residents. The public event came alongside a number of meetings and deals between US businesses and the Indian government, further cementing US imperialism’s domination of Indian markets.

The event, which became the most attended appearance of a foreign dignitary in the US (with the exception of the Pope) was organized by the nonprofit Texas India Forum, which describes itself as an organization which “encourages cooperation between the US and India.” This “cooperation” is really the cooperation between comprador-capitalists in India and US imperialism, which sees India both as an important market and a strategic asset.

At the rally Modi began by repeating in several languages “everything is great in India.” This attempt at reassuring Indian-Americans comes as India struggles with an increasingly worsening economy and record unemployment levels. For the rest of the rally, he and Trump praised each other for going after “radical Islamic terrorism” and for their common deplorable treatment of immigrants and asylum seekers.

Together the two also celebrated a multibillion-dollar deal that Modi oversaw the previous evening at a prestigious Houston hotel. Brokered between Houston-based liquid natural gas company Tellurian and the state-run Indian corporation Petronet, the deal will establish a 40-year agreement for Petronet to import up to 5 million tons per year of liquid natural gas (LNG). In addition, Petronet will agree to invest $2.8 billion in an LNG export terminal which is being built by a subsidiary company of Tellurian. As the US continues to expand its production of oil and natural gas, much of it coming from Texas, it seeks to dominate world markets in oil, petrochemical, and natural gas exports.

Alongside that deal was a closed-door meeting between Modi and chief executive officers (CEO) of 17 US energy companies, including ExxonMobil. According to Modi’s speech at the Howdy Modi event, the CEOs praised him for the Indian government’s plan to slash corporate tax rates from 30% to 22%, which had been announced a few days prior. This slashing of the tax rate is a desperate move by the Indian government to attract foreign businesses to invest more in the country, deepening their dependence on US imperialism, in an attempt to abate fears of a slowing economy and an unemployment rate higher than India has seen in decades.

A few days later, Modi met with 36 other CEOs, representing JP Morgan, Bank of America, IBM, and others, in New York City. At the meeting, the American CEOs expressed concern over the burgeoning economic crisis in India, and according to sources, Modi listened to their input on what “India needs to do,” and left the CEO’s feeling reassured and “ready to invest more in the country.”

This comes on the back of India’s desperate ploy to stoke Hindu fascism by revoking the special status of Kashmir and allowing Hindu nationals to buy up property in the Muslim-majority region. “Article 370,” Modi announced at the rally, referencing the article in the Indian constitution which granted the region its special status “had deprived the people of Jammu and Kashmir and Ladakh from development and rights. Terrorists and separatists were using it to their advantage.”

It was the violent repression in Kashmir, and the general wave of Hindu fascism in India stoked by Modi’s Bharatiya Janata Party, which the thousands of Houston protesters opposed. The bulk of the protesters themselves were from South Asia, some of them Indians, others from Pakistan, and others still representing Kashmir and Khalistan separatist groups. 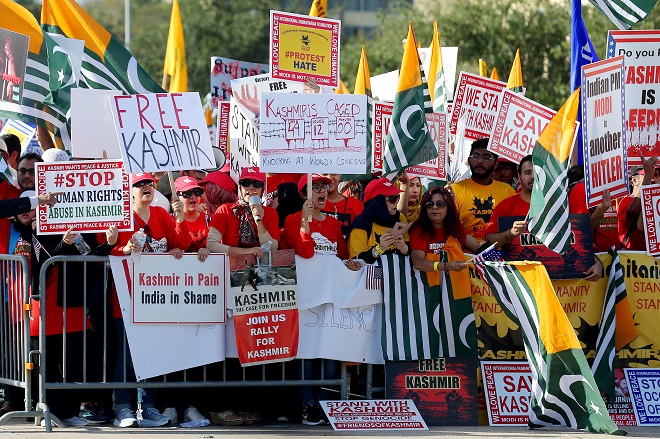 Many of the Indian protesters came together under the name Association for Justice and Accountability (AJA), and they were joined by activist groups Black Lives Matter and Jewish Voices for Peace. AJA was quick to distance themselves from other groups, releasing a statement before the protest that they were “totally distinct from other non-Indian American protesters or those who challenge India’s territorial integrity.” While protesters could agree on their disdain for Modi and opposition to Hindu fascism, they agreed on little else.

Many signs called Modi a butcher and fascist, others compared him to Trump and even Hitler, and the crowd frequently chanted “Modi Modi you can’t hide / you committed genocide.” Other signs called for an end to the lynching of Dalits and religious minorities in India or for “freedom for Kashmir.” Kashmiri flags flew alongside Khalistani, Indian and US flags. One speaker implored Americans to reject Modi as he did not meet the values of “freedom and democracy” which “America represents.”

Despite their progressive opposition to the wave of fascist violence and repression in India, the protesters could not draw the link between this fascism and US Imperialism. The main enemy of the people of India, including Dalits, the various religious minorities, and the oppressed nations occupied by the Indian state, remains US imperialism and it is US Imperialism which backs this rise in nationalism.

Abroad, Modi seeks to assuage fears of a crumbling economy both with the Indian diaspora and more importantly with the driving forces of US imperialism. At home, he stokes the fires of fascism and nationalism to strengthen his political hold on the country and distract from economic woes. As the global capitalist system approaches another great crisis, the Communist Party of India (Maoist) recently announced the decades-long People’s War would soon be making a qualitative leap, the People’s Liberation Guerrilla Army changing its name to the People’s Guerrilla Army to reflect its expanding operation throughout the country. With the leadership of the Party, the people have a path to true liberation- New Democratic revolution towards socialism.