On September 5, workers in the province of Imbabura, Ecuador took to the streets in defense of workers’ rights against the reactionary labor reform policies of Ecuadorian President Lenín Moreno.

Led by the revolutionary organization Defense Front for Worker’s Rights-Imbabura (FDDT-I), workers blocked the main access road north to the city of Ibarra.

The march demonstrated a marked opposition to revisionism and parliamentary cretinism, consolidating a proletarian line not seen by the Ecuadorian workers’ movement in years. Opportunists from the Popular Unity Movement, a revisionist political outfit that regularly makes use of bourgeois elections, attempted to seize control of the march and manipulate the class-conscious workers but were ultimately rejected by the masses. 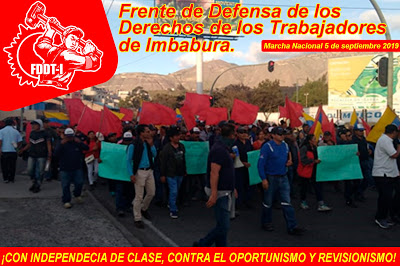 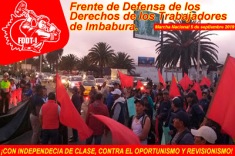 Opponents of Moreno’s reactionary government have pointed to several policies which show the administration’s subservience to US imperialism and willingness to push workers further into destitution.  In the interest of reducing the national deficit, Moreno has instituted a series of layoffs in the public sector, privatization of public services, funding cuts to education and health services, and an increase in the price of fuel. These austerity measures are motivated by Moreno’s agreement with the International Monetary Fund (IMF) for a loan of $4.2 billion, which is projected to increase unemployment and lower wages, while waiving regulations on the financial sector.

Moreno has exposed himself as a lackey of US imperialism, not only by signing an agreement with the IMF that sells workers down the river, but also by making overtures to the US military to the detriment of the peoples of Latin America. He has joined Colombian President Iván Duque Márquez in supporting the US puppet Juan Guaidó in Venezuela, and has agreed to allow the US Air Force access to government airstrips on Galápagos Island for operations against “drug trafficking.”

Ecuador has already seen one massive national strike in July, which lasted five days and saw the participation of workers, poor peasants, and indigenous people, and now the FDDT-I are preparing for another.

As one comrade of the FDDT-I put it, “we must be more vehement, more direct, more combative, and if possible, even more violent so that the regime listens to us and corrects its course.” Emphasizing the need to combat opportunism and parliamentary cretinism he goes on, “the fight against the hunger regime, imperialism, the transnationals, big mining, the big businessmen and the big landowners has to be closely linked to the fight against opportunism and the supporters for the elections or for winning seats in the assembly or in local governments.”

The class conscious workers of Imbabura have clearly demonstrated their rejection of the reactionary old state and Moreno, the lackey of US imperialism, as well as the opportunists who traffic in the worker’s struggle to bring more votes to their dead-end political parties. They have shown that only by mobilizing the workers in the streets and poor peasants in the countryside can they truly fight for the future they want, one free of imperialist domination, semifeudalism, and worker’s exploitation.