On Wednesday, Indonesian police in the West Papuan Deiyai Regency killed six protesters and injured several more, including children, during a protest supporting West Papuan national liberation. The vicious police crackdown is part of a larger pattern of state repression against the oppressed nation of Papua.

At least one police officer was killed and five more injured during the protest in Deiyai. Combative demonstrators wielded machetes and shot arrows at police, capturing firearms and ammunition in the process. A month prior, another two police officers were killed by the rebels of the West Papua National Liberation Army, who recently joined forces with two other Papuan rebel groups to form the West Papua Army. 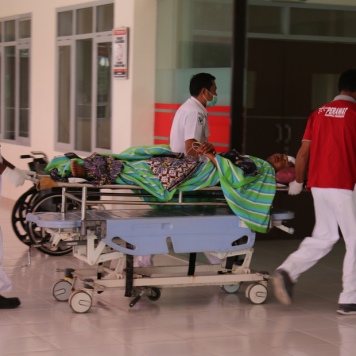 Police injured during Wednesday protests is transported to a hospital 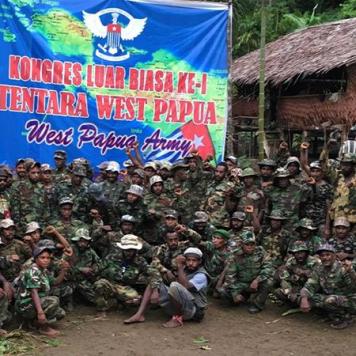 Protests have been raging since last week, after a video surfaced online showing Indonesian paramilitaries detaining 43 Papuan students in Surabaya for allegedly burning the Indonesian flag on Independence Day. Dozens of paramilitary and military officers surrounded the student dormitory, using racial slurs like “monkeys” while local police stormed the building to arrest them.

During the course of protests, demonstrators burned a parliament building in Manokwari and a prison in Sorong. Since August 21, the Indonesian government has censored the internet in West Papua and mobilized hundreds of troops to crack down on the protests. The lack of internet access for the people of West Papua has led to conflicting reports of the number of casualties in the bourgeois media, with some using the number provided by Papuan witnesses and other using the information directly from the police.

Papua is a former Dutch colony that declared independence in the early 1970’s, but was annexed when neighboring Indonesia took control of the resource-rich region following an independence referendum sponsored by the United Nations, widely viewed as a farce. It should be noted that Papua has the largest gold mine in the world, yet is one of the most underdeveloped regions in the country.

The Papuan masses have clearly demonstrated their willingness to rebel against national oppression perpetrated by the Indonesian government. As lackeys of imperialism, the bureaucratic capitalist government based in Jakarta exploits the people of West Papua by using the region as a semicolony for the extraction of raw minerals for export into the international market.

Recent reports indicate that the Indonesian government will ban the export of unprocessed minerals starting in 2022, however this policy is not aimed at removing imperialists from the equation, it is meant to bolster the position of Indonesian mines in the international market by pairing them with local smelting facilities. By increasing the efficiency of extracting and processing minerals before export, the Indonesian government is doubling down on mineral exports, and by extension the national oppression of West Papua; the reactionary state is positioning itself to create even larger profits for the imperialists.

As more Papuan masses take to the streets to oppose national oppression, state repression will continue its violent rampage against the people. The reactionary Indonesian state has already tried once to exterminate the righteous anger of the people in the 1965-66 genocidal campaign against the Communist Party of Indonesia (PKI), but the blood of the masses does not stop the revolution, it only helps it grow. The struggle of the people in West Papua is part of a global resurgence of national liberation struggles, from Kashmir, to Palestine, to Ireland, and deserves the support of revolutionaries and progressive-minded people across the world.