On August 13 the people of Brazil took to the streets in 26 states and the federal capital for a National Education Strike. The protests were called in opposition to the anti-people policies of the reactionary Brazilian government, headed by Bolsonaro and the High Command of the Armed Forces, including funding cuts to federal universities, the privatization of public education through the “Future-se” program, and the dismantling of the national pension system.

In Rio de Janeiro tens of thousands of students, teachers, and workers mobilized downtown despite the pouring rain in defense of public education. A militant bloc composed of the Popular Revolutionary Student Movement (MEPR), Red Unit – Revolutionary Youth League (UV-LJR), Popular Women’s Movement (MFP), and the Class Movement of Education Workers (Moclate) marched with a banner reading “Neither Bolsonaro, nor Mourão, nor the corrupt Congress and out with the reactionary Armed Forces!”

The militant bloc chanted slogans against the Bolsonaro government and the military police, while carrying pictures of Gabriel Pereira Alves and Dyogo Coutinho, who were recently murdered in police operations in Rio de Janeiro and Niterói. Representatives from the Brazilian Center for Solidarity of Peoples (Cebraspo) were also present, raising posters demanding the freedom of French political prisoner Théo El Ghozzi. 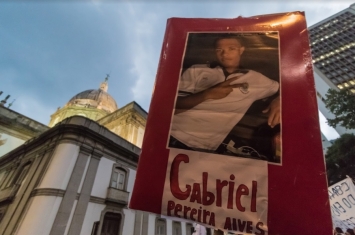 In João Pessoa, capital of Paraíba, another 10,000 students, teaches, and workers protested against the reactionary policies aimed at destroying free public education. Protesters released black balloons as a sign of mourning for education as well as the attacks on pensions.

Peasants in the city of Januária, northern Minas Gerais, blocked a highway in support of the National Education Strike. Carrying flags of the League of Poor Peasants (LCP), they erected a barricade with burning tires and raised a banner reading, “General Strike against pension reform!” They also raised a banner against a notorious grileiro (land owners who steal the land of poor peasants with falsified documents and the aid of police) with the slogan, “Out with Walter Arantes, land thief!” Arantes is known for arranging the violent displacement of poor peasants in the municipality of Miravânia earlier this year.

Bolsonaro’s short tenure as president, at this point still less than one year, has seen several waves of massive strikes and demonstrations, which have been supported by students, workers, and peasants around the country. The popular movements have not limited themselves to opposing Bolsonaro, but also raise slogans against the corrupt congress, reactionary armed forces, police, latifundio (large landowners), and destructive corporations. Follow A Nova Democracia for full coverage of the ongoing struggles in Brazil.