Countering the mainstream bourgeois presentation of Kahlo as a pop icon, the event focused on emphasizing her revolutionary legacy, especially her stance when she denounced revisionist Leon Trotsky and committed herself to the International Communist Movement.

“Since Trotsky came to Mexico I have understood his error. I was never a Trotskyist. But in those days 1940 — my only alliance was with Diego [Rivera, a Trotskyist and her husband],” Kahlo writes in a 1952 diary entry. “Now in 1953, after 22 surgical interventions I feel better and now and then I will be able to help my Communist Party. Although I’m not a worker, but a craftswoman — And an unconditional ally of the Communist revolutionary movement.”

The artist joined the Communist Party of Mexico in the late 1920s and rejoined in the 1940s when she felt most strongly the necessity of serving the Party and the people with her artwork.

“I feel uneasy about my painting. Above all I want to transform it into something useful for the Communist revolutionary movement, since up to now I have only painted the earnest portrayal of myself, but I’m very far from work that could serve the Party,” Kahlo writes in a diary entry dated 1950-1951. “I have to fight with all my strength to contribute the few positive things my health allows me to the revolution. The only true reason to live for.”

After a birthday cake was served, a piñata of Trotsky was hung from a tree and bashed by attendees with a stick. One of the most despicable opportunists in history, Trotsky was expelled from the Communist Party of the Soviet Union in 1927 and eventually fled to Mexico.

The birthday celebration culminated with attendees marching a couple blocks away to where a large mural had been made on an abandoned building, depicting Kahlo holding hands with a PWM militant in the style of her 1939 painting The Two Fridas. While the creators of the mural are unknown, a PWM representative told Incendiary how the group interpreted the artwork.

“The image communicates a solidarity between PWM-MFP and Frida Kahlo based on the ideology of Marxism-Leninism-Maoism, principally Maoism, represented by portraits of those revolutionary leaders, along with portraits of revolutionary women heroes, and the blood from enemies of the working class at the feet of Frida Kahlo and [the PWM militant],” the representative said. 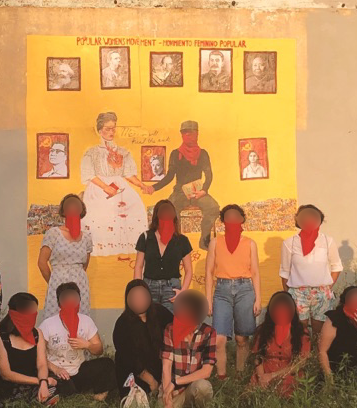