On Saturday, activists with Serve the People – Pittsburgh and community members from the black neighborhoods Lincoln-Lemington and Larimer succeeded in disrupting and shutting down Mayor William Peduto and Councilman Ricky Burgess’s ribbon-cutting event for a much-loathed “spray park” at Lincoln-Lemington’s Paulson Playground. This event, meant to be a public relations victory lap for phony-progressive Mayor Bill Peduto and gentrifier Councilman Ricky Burgess, was transformed into a venue for the masses to speak out against their enemies.

The “spray park” is replacing a beloved public swimming pool which has been shut down for at least 3 years. One Larimer resident present at the disruption told Incendiary, “This new water park isn’t for us, isn’t for the community. It’s for the new people they’re trying to bring in”—in reference to the wave of gentrification expected to hit the area in the coming years.

At noon, immediately before the event was to begin, three revolutionary residents of the area suddenly seized megaphones and began to address the enemy unsparingly; simultaneously, militants from Serve the People unfurled a banner emblazoned with the slogan “Fight Gentrification With Revolution” painted across it, blocking the podium and the ribbon from view.

“Ricky Burgess is a demon!” shouted one resident who had taken the megaphone, “These people have back-stabbed us over and over and over again, and we have all the proof! We’ve had enough of this!” Taking up Serve The People’s slogan, he continued, “Stand up! Fight Gentrification With Revolution!” a chant that was repeated many times that Saturday afternoon. Meanwhile, Mayor Peduto and Councilman Burgess took refuge in a pavilion in the back, Peduto wearing a T-shirt which bore the racist slogan “All Lives Matter” on the shoulder. 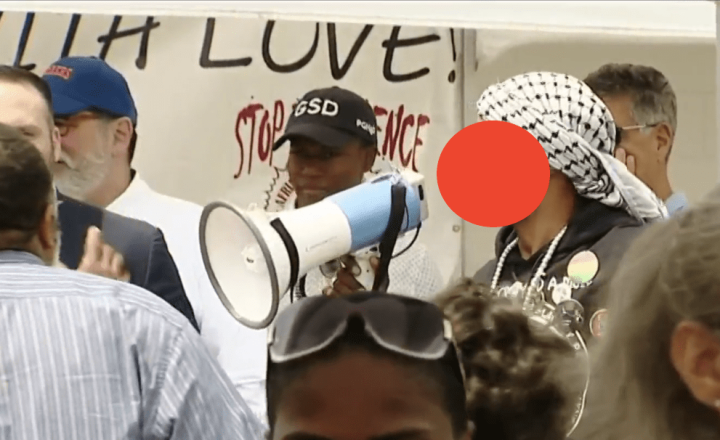 One community-member from Larimer, a single mother of a young cancer patient, shouted “I got nothing to lose but these chains!” shortly after confronting Councilman Burgess for his role in making her homeless. She went on to connect the dots between hated gentrifying developer Keys Property Management Services (KPMS) and the Councilman. Just two days before the disruption, on the order of KPMS, several cops burst into her home armed with guns and threatened to kill her dog, throwing her onto the street with all her belongings locked inside.

KPMS and Councilman Burgess are working together to clear the working-class neighborhoods of Garfield, Lincoln-Lemington, Larimer, and Homewood for gentrification—neighborhoods Burgess describes derisively as “poverty-ridden.”

The fury of the masses of Lincoln-Lemington over the gentrifying “spray park” had overflowed, making it impossible for the Mayor and his cronies to obtain the quick PR victory which they had hoped for. Attempts by the mayor’s supporters to seize Serve the People’s banner were unsuccessful, thwarted by community members who took it upon themselves to defend the revolutionary display.

Mayor Peduto and Councilman Burgess departed without completing the ribbon-cutting as the community members continued to shout revolutionary slogans alongside Serve the People’s activists. Children were seen playing in the water against the backdrop of Serve the People’s banner as Peduto and Burgess fled.