On the last weekend of February, the revolutionary group Jeunes Révolutionnaires (Young Revolutionaries) hosted a Conference of Revolutionary Mass Organizations, the first of its kind in France.

Young Revolutionaries began last year, setting up chapters outside of the Parisian region after June 23, 2018 when it officially jumped to a nationwide level during the International Meeting for the 50th anniversary of the events of May-June 1968. Since then, the organization has seen rapid developments and is now active in more than 20 cities. Its main goal is organizing the youth as part of a revolutionary united front.

One of the objectives of the conference was to both strengthen the Young Revolutionaries and fuel the development of other revolutionary mass organizations. Three other sections of the masses identified at the conference in need of organization were workers, women and LGBTI.

At the conference, the Young Revolutionaries struggled to make their points of unity more precise and to create a united direction for the whole organization. Together with attendees, they produced five brochures and an “Initial Course” document. A sixth brochure on the question of the environment was also proposed during the conference.

The conference helped Young Revolutionaries better organize its structure and adopt correct methods of leadership and methods of confronting and preventing abuses and aggressions inside the organization. This was an especially important goal, as in the revisionist and so-called “revolutionary” organizations, a lot of violence, principally sexual, has happened without any repercussions.

Revisionists have covered up such vile acts and excluded the victims (mainly women) to protect abusers. During the conference, this issue was discussed and analyses on liberalism and sexual violence were presented.

In French society, as in all countries, the place of women in capitalist society makes them the majority among the working class and the popular masses. Organizing women and unleashing the revolutionary potential of women of the deepest and broadest masses is thus the main task of the coordination body. Prior to the conference, the comrades had identified self-defense as an area of work for a mass organization of revolutionary women. The women coordination body was approved unanimously by the comrades present at the conference.

The organization aims at organizing LGBTI self-defense against abusers, the bourgeois state and reactionaries in every part of society, but mainly in the medical field. It also wishes to develop revolutionary solidarity between the LGBTI from the popular masses, and start an archival work on LGBTI history in the French State and abroad, linked to the international struggle. The initiative was massively cheered and congratulated at the conference.

Finally, a very important development was done with a mass organization for workers. Under the current name “Front Prolétaire” (Proletarian Front), a worker’s initiative was presented by the comrades at the conference with the goal of uniting young workers from Young Revolutionaries and older worker sympathizers of the revolutionary movement in a new mass organization.

The Proletarian Front aims at fighting principally in the factories and places of work with the goal to organize comrades of our class in a larger revolutionary political organization. The place of such an organization in relationship to trade-unions was discussed.

The comrades were in accord that the Proletarian Front would use any means necessary to advance the cause of the proletariat on a revolutionary path, fighting against economism, legalism and uniting broadly the unorganized working masses. The migrant masses and working-class women were regarded by the comrades as particularly important in the deployment of their mass work. 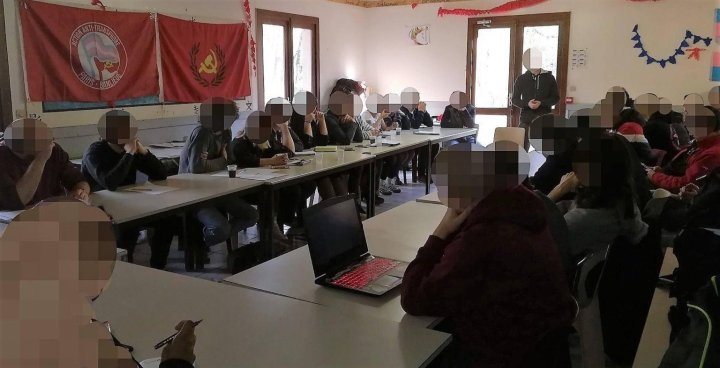 All of these initiatives came together at the end of the Conference to discuss upcoming dates where all of them could work with each other in the form of a revolutionary United Front. The revolutionary media La Cause du Peuple made a commitment to propagate and unite all of these coordination bodies and organizations as well as their mass work and events.

Ideologically, the conference laid out the points of unity for a revolutionary United Front in the French state. Politically, it united different initiatives that had found their expression in the dynamic launch of Young Revolutionaries.

The conference was also a moment of deep comradeship and celebration of the 47th anniversary of the death of Maoist worker Pierre Overney, a young worker and mass member of Gauche Prolétarienne (Proletarian Left) during the beginning of the 1970s. He was agitating at a factory by handing out leaflets for a demonstration for the 10 years of police violence at Métro Charonne which killed nine people in 1962 fighting against the colonial war in Algeria. Tramoni, a guard from the private security of Renault, then shot and killed Overney on the spot. More than 200,000 people attended his funeral.