The Blue Cat Café has officially closed. The site of a three-year anti-gentrification struggle, the gentrifying business could not remain profitable at East Cesar Chavez area thanks to the militant resistance of local community members led by revolutionary organization Defend Our Hoodz.

“For all those who have stood with us, and seen through the lies, the distortions of gentrifiers, and even attacks from supposed community leaders about our organizing and group, we thank you immensely for your support,” Defend Our Hoodz said in a public statement yesterday. “This victory is yours as well, especially if you have ever joined us on the picket line or spread the word about the boycott of Blue Cat Cafe.”

The café’s demise had been looming for months, with few customers frequenting the business and rumors spreading that owner Rebecca Gray was only using the building for a living space.

Nearby residents tipped off Defend Our Hoodz Monday morning that a moving truck had been spotted and further investigation revealed that furniture had been moved out and that many kitchen supplies were crammed into the food trailer. The windows of the business were blacked out.

Gray yelled off one person who was looking into what was going on. The gentrifier has always antagonized protesters and picketers of her business, but in recent months she has run off her own customers, according to multiple Google and Yelp reviewers. 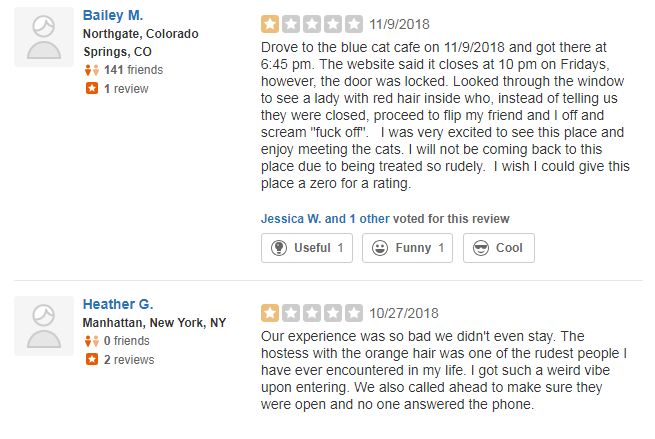 With the owner leaving the building and confirming in a statement that the business is over, the battle of the Blue Cat Cafe, a high-profile symbol of gentrification, has come to an end, but the boycott of the property owners F&F Real Estate Ventures continues and will likely escalate.

What started as a call to action by reformists transformed into a militant and uncompromising campaign that rejected a liberal approach to organizing and embraced a revolutionary stance, defeating every ally Blue Cat recruited in its defense along the way, including some animal advocates, Trump supporters, InfoWars, and Nazis.

In February 2015, a community boycott was called against landlords F&F for their violent demolition of the Jumpolin piñata store as part of their plan to prepare the property for a SXSW show. F&F co-owner Jordan French referred to the demolition as clearing out a “house that was infested with roaches.”

Gray smugly rejected the demands of the community when she crossed the picket line to open Blue Cat in October 2015. Her business has been consistently protested ever since, with the biggest rallies coinciding with the anniversaries of Jumpolin’s demolition and Blue Cat’s opening.

In the past, Blue Cat Cafe has counted on the support of reactionaries when cracking under the pressure from the community. When the words “Fuck you Gentrifier scum” were spray-painted on the building in October 2016, Gray started a Gofundme campaign and went on Alex Jones’ Infowar to appeal to his Trump supporting, conspiracy theorist audience. This raised over $15,000 and resulted in racist, violent threats being sent to Blue Cat Cafe’s opponents.

One of the most militant marches occurred on February 11, 2017, where protesters trashed Blue Cat’s patio and then proceeded to take the highly trafficked E Cesar Chavez. When one masked militant was arrested by police and put in a paddy wagon, a group of supporters lined up to temporarily block the vehicle’s exit.

Blue Cat Cafe was not only a culprit in the area’s rampant gentrification but had strong ties to Patriot Front Nazis in the Central Texas area. This included the owner’s brother, Paul Gray, who she had called on to protect her cafe in June 2017 which led to a skirmish between Gray’s gang and masked picketers. The fight resulted in Patriot Front member Erik Sailors getting his head cracked by a stick-swinging protester, captured in a now iconic photo. 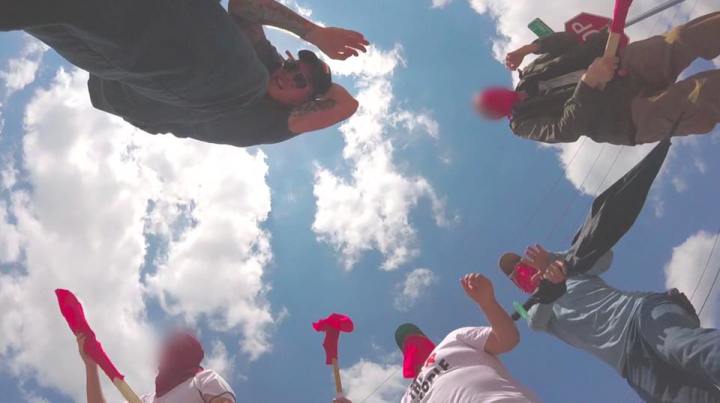 Later that year, reports from former employees started to leak out about Gray’s abusive and neglectful management style as well as the poor caretaking of the cats housed at the establishment.

“I want this to be a warning to anyone who is thinking about working for or associating with Blue Cat Café,” one former employee said in a letter given to Defend Our Hoodz. “I should have wised up at several points during my time there. It wasn’t until things got really bad that I finally left. Always do your research on a job if you can and see where they stand with their community. It is a community that can make and break a business.”

The bad press eventually led to Fuzzy Texan Animal Rescue, Blue Cat’s primary supplier of cats, cutting ties with the gentrifier business in July 2018 and removing all their donated pets. Austin Humane Society had broken their relations with Blue Cat a year earlier thanks to pressure from Defend Our Hoodz and others.

Associated with Nazis and reactionaries and deprived of the establishment’s main selling point, Blue Cat was no longer a desirable location to visit, even to the gentrifiers who once gladly patronized it. It was only a matter of time before Gray closed its doors for good.

“Some may claim that we didn’t have anything do with their closing, and it wasn’t our tactics that won this,” Defend Our Hoodz said in their statement. “This is pure fantasy. Blue Cat Cafe is leaving because they couldn’t withstand the unified force of people militantly holding them accountable. We made her Gentrification project unprofitable.”

This victory for Defend Our Hoodz and the East Side Barrio is also a decisive blow to gentrifiers and their defenders. The militant tactics which garnered resentment and unprincipled criticism from liberal onlookers have achieved undeniable results. Gray’s arrogant confidence that she could open a gentrifier business on the ruins of Jumpolin without consequence has been punished by the organized force of the masses.

Defend Our Hoodz emphasized in their statement that the boycott of the property and F&F Real Estate Ventures continues and that this is only the end of the first round in a much longer fight.

Incendiary extends our heartfelt congratulations to Defend Our Hoodz and their supporters, and we look forward to covering the next chapter in their fight against gentrification.