The Royal Canadian Mounted Police (RCMP) forcefully evicted camps set up by the Wet’suwet’en tribal peoples defending their unceded territories in the province of British Columbia. In total, fourteen campers protesting the governments plans for an oil pipeline were arrested.

The attack is considered an ‘act of war’ by traditional tribal leaders, and shows the violent nature of Canada’s settler-colonial origins.

The evictions are meant to clear the way for the Trans Mountain pipeline, a mega-project stretching from the pristine waters off the coasts of British Columbia to connect to tar sands extraction sites in the province of Alberta.

Tar sands extraction is one of the most destructive forms of oil extraction developed by capitalists to fuel their energy profits. It involves the processing of bitumen, a dirty ore which requires intensive processing to draw oil out from it.

While Prime Minister Justin Trudeau recently nationalized the project, the private contractor is TransCanada, the same behind the infamous KeystoneXL pipeline.

Indigenous people’s at Standing Rock in North Dakota fiercely fought the KeystoneXL pipeline for over a year until the US government violently suppressed the resistance, which had gained international support.

The indigenous checkpoints in Canada have stood since 2010, endorsed by hereditary chiefs of the Unist’ot’en and Gidim’ten clans of the Wet’suwet’en tribe. The energy companies and government have claimed that they have the support of the elected Wet’suwet’en council, but the hereditary chiefs and their supporters argue that means little without the support of the traditional leaders who are considered the true caretakers of the land.

The evictions of the Wet’suwet’en camps stand in contrast to the public statements of Canadian Prime Minister, Justin Trudeau, who has made repeated promises to atone for the colonial practices of Canada throughout its history and build better relations with the aboriginal inhabitants. Indigenous peoples and the supportive masses are outraged that Trudeau could make such claims but act with the same genocidal, land-stealing practices that settler governments like Canada have carried out throughout its history.

At the start of his administration in 2015, Trudeau made lofty statements about his commitment to Canada’s aboriginal peoples, “Our goal, as we move forward together, is clear,” he said. “It is to lift this burden from your shoulders, from those of your families and communities. It is to accept fully our responsibilities and our failings, as a government and as a country.”

In recent days, indigenous Canadians confronted him with hard questioning at a town hall Kamloops, B.C. According to the Toronto Sun, one man named George said, “You’re getting people arrested. You’re a liar and a weak leader. What do you tell your children?” 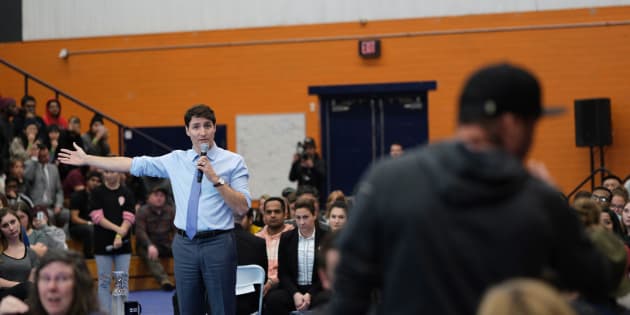 With these violent evictions and the forcing of pipelines through indigenous territory, Trudeau illustrates how liberal imperialists are some of the worst enemies of the people. They make grand promises of cooperation and inclusion while carrying out the same anti-people actions as any openly anti-indigenous government.

As the pretty face of Canada’s colonial government, Trudeau has attained celebrity-like status among North American liberals for his looks and pandering to liberal politics of more diverse imperialism.

This mirrors the deceptions of US politicians such as Barack Obama and ascending social-democrat Alexandria Ocasio-Cortez, who raised her profile in part by joining the popular call to “Abolish ICE.”

Yet early this month, she voted with the Democratic bloc in the House of Representatives to fund the department of Homeland Security (DHS), the agency which oversees ICE. This DHS funding bill was not part of any larger funding package and was a uniquely created political stunt that Democrats argued would force Trump’s hand to end the government shutdown. The DHS bill had no impact and the shutdown is now nearing its fourth week.

Just days after voting to fund ICE, Ocasio-Cortez appeared on MSNBC with more empty posturing to cater to her liberal followers, stating, “The president should be really defending why we are funding [ICE] at all because right now, what we are seeing, is death.”

As with all indigenous anti-colonial struggles, the resistance of the Wet’suwet’en exposes the violent foundation of imperialist governments worldwide, particularly when liberals and social-democrats are at their head. As capitalists continue to build pipelines and other infrastructure through indigenous territory into the future, the colonized and oppressed nations of North America must wage war to fully overthrow the ability of settler governments to devastate the land and people. They must defeat imperialism itself to break free of the chains of the old society and join hands with the proletariat to construct a new society that is built on social and environmental good, rather than the profits of the capitalist ruling-class.