AUSTIN – The Travis County Medical Examiner’s office has recently declared professor and violent domestic abuser Richard Morrisett’s death a suicide, according to an anonymous source that has seen the report.

“An empty bottle of Euthasol (pentobarbital and phenytoin used for animal euthanasia) was found in the residence, along with a syringe,” according to the autopsy report.

After finding out about Morrisett’s violent abuse against his girlfriend in May 2016, the Revolutionary Student Front (RSF), a now defunct revolutionary front on the campus trench at the University of Texas at Austin (UT), waged its most militant and final campaign against the pharmacology professor.

Maoist students have a long history of exerting mass pressure from below against those in positions of power, like Morrisett, dating all the way back to the Great Proletarian Cultural Revolution, where professors were a major target. The Maoist-led student front at UT kept these traditions alive by initiating a mass campaign that helped to drive at least one abuser to death by his own hand.

Conservative media, like the American Thinker website, has capitalized on the recent confirmation of Morrisett’s death as suicide by putting the blame squarely on the “blood-thirsty” RSF.

“They spray painted the building’s front stone facade with red paint reading: “UT harbors abusers.” Nearby on the sidewalk, they wrote: ‘Watch your back, Richard.’ And Morrisett’s office door was spray painted: ‘Get out Morrisett or else!’ The graffiti was signed with hammer and sickle symbols, and later posted on the website of the local Revolutionary Student Front.”

According to an official statement responding to the initial report of Morrisett’s death back in April, the RSF reaffirmed its commitment to the people, especially women victims of abuse.

“First, it must be said that we do not shed any tears for dead abusers. In contrast to the statement given by UT President Greg Fenves, the death of Morrisett is not a tragedy by any means,” according to the RSF statement. “The world is better off, if only marginally, for having one less abusive, dangerous man breathing in it. His death means there is one less person who presents an active threat to the women surrounding him.”

Maoists adhere to the saying to die in service of the reaction is lighter than a feather, and this is how they view Morrisett’s timely suicide.

“He used his expertise in pharmacology to kill himself. I do believe he was riddled with fear and guilt caused by our campaign and the actions of other students,” a former leader of the RSF told Incendiary News.

To the student leader, the cause of death was not at all a surprise.

“I thought if not due to suicide it could have been alcohol poisoning or accidental overdose, but since he knew medicine I thought intentional overdose was most likely.”

While RSF has dissolved, after many bold actions and successful campaigns around issues facing working-class women carried out by revolutionary students and their supporters, an organization tracing its origins back to the Morrisett campaign emerged known as the Popular Women’s Movement (PWM, or in Spanish el Movimiento Femenino Popular – MFP) has emerged.

According to its founding statement, the PWM-MFP exists to carry out the type of organizing which concluded with Morrisett’s demise, something which has not been well-documented and reported.

The bourgeois media does not want to bring more attention to the militant campaign against Morrisett because they know it would only further embolden revolutionary working-class women to take up similar tactics and initiate revolutionary organizations like PWM-MFP against scores of reactionary male abusers.

Incendiary News spoke with one of PWM-MFP founding members who said:

“Once the campaign was heating up on campus, it became clear to us as Communists that an organization needed to exist to specifically address issues women and particularly working-class women face here in Austin. While RSF did excellent job with the campaign, a more long-term struggle needed to be pursued.”

When asked specifically about the suicide of the reactionary professor she said there isn’t only one fate that awaits abusers. You either transform for the people or die in service to the enemy.

“We don’t see the death of abusers as the only option. In fact, transformation would be ideal. We believe that if abusers commit suicide due to a campaign against them, that it is their final act of defiance against transformation. They would rather die an abuser than to humble themselves before women, admit wrongdoing and actively engage in their own rehabilitation.”

While popular movements like the #MeToo movement generate lots of media hype, the campaign against abusive men at UT took a more militant approach under the guidance of Maoists with clear and indisputable results.

In February 2018: RSF and supporters led protests, rallies and actions against Morrisett, such as the February 13 “Rally to Run Off Morrisett” that drew mass support from the progressive and revolutionary students and supporters at UT. On February 5, UT police discovered anti-Morrisett graffiti outside the door of the School of Pharmacy building at UT, such as “Watch your back Richard” with a hammer and sickle. 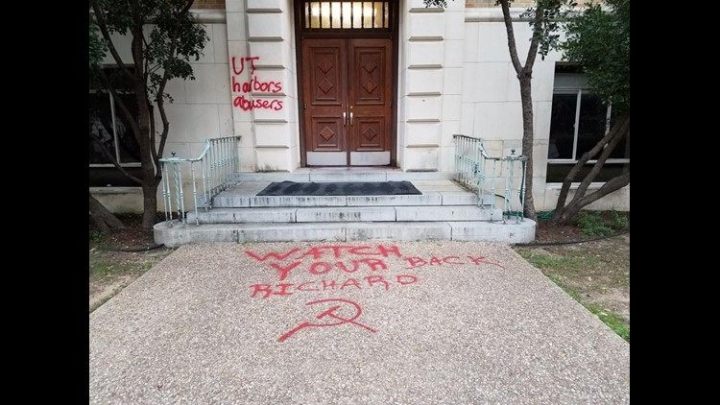 In March 2018: On International Working Women’s Day, supporters of RSF dyed the UT fountain red and spray-painted hammers and sickles and revolutionary slogans on the university’s walls, such as “This is the blood of survivors that UT ignores.” The bold action received international media attention.

“The blood of women and survivors flows from the fountains of UT and we know that to truly address patriarchal violence, we must organize the people to attack and destroy capitalism, its institutions, and those who perpetuate this violence,” RSF said in an online statement. 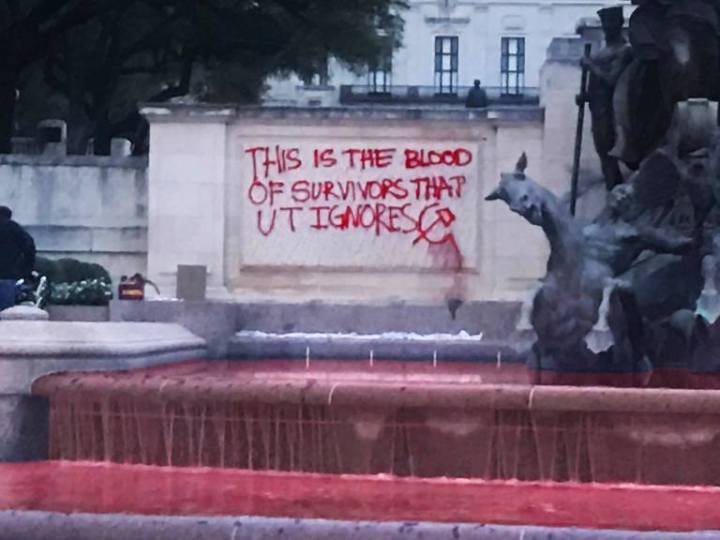 Former RSF leadership, responding to the claims that their campaign was solely to blame for Morrisett’s death stated “RSF’s actions were a factor in his decision to kill himself. Still, they were only an outside force aggravating the guilt, shame, and fear he already had inside of him. What he did to that woman was truly awful and it would have caught up to him eventually in some form.”

What is clear in Austin is that it is no longer business as usual for men who abuse women. Since the emergence of the local Maoist movement abusers in and outside of the left have been consistently targeted; this is confirmed in the development of PWM-MFP. Let those who abuse women take a lesson from these events and let them seek transformation lest they end up like the late Morrisett.