On November 6th, a group of militants and revolutionaries took up the slogan “Elections, No! Revolution, Yes!!” by holding a picket in front of a polling site in Charlotte, NC.

Serve the People—Charlotte (STP-C) picketed for an hour, passed out flyers and had conversations with the masses about why voting will not make life easier for the working class.

“Voting does not affect the lives of the working class,” n STP-C volunteer told Incendiary, “most so-called leftists claim to recognize this, opportunistically placing a criticism of the elections, but go out and vote anyways. STP-C takes a hard stance against voting because we know that depriving the capitalist-imperialists of our faith in their system allows us to agitate the masses toward more revolutionary action.”

Throughout the evening STP-C volunteers reiterated that the quality of political line takes precedence over doing what is trendy. Many “leftists” take middle of road positions on voting: they state that voting changes nothing and both parties are identical but still fear-monger revolutionaries who organize against the electoral sham. Abstention from voting does not harm the masses.

The day of action denouncing the electoral farce started outside of the West Boulevard Library—in the heart of the West side, the majority black working-class area of Charlotte. STP-C’s mass work has been centered in this area since May 2017. The yellow banner which read “Don’t Vote, Organize and Fight!” matched yellow posters which were pasted throughout the West side. 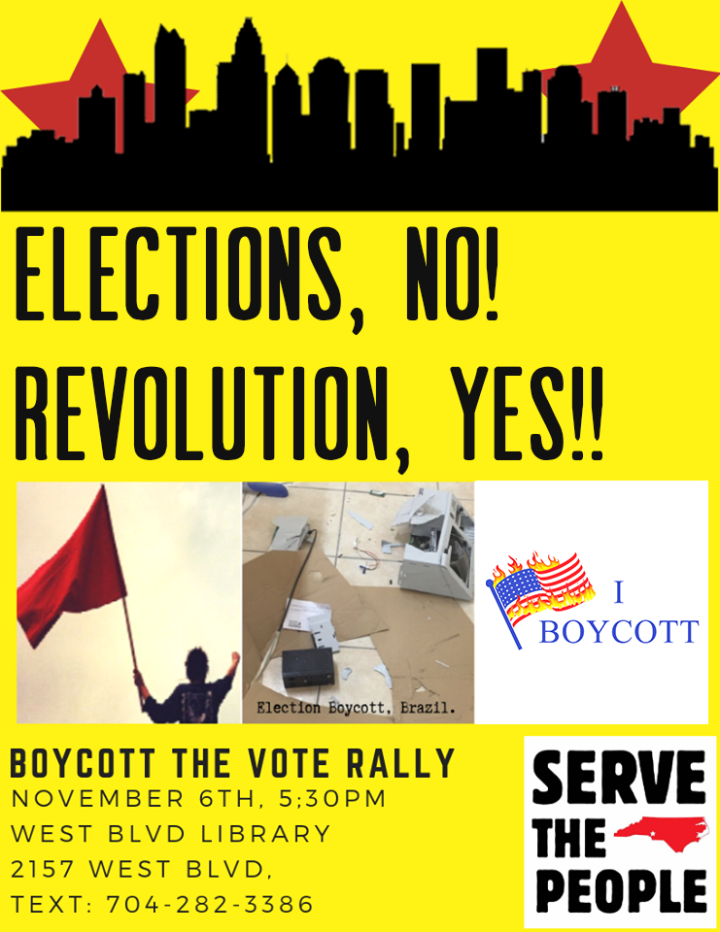 The masses who passed by, most of whom were not excited about this election cycle, were given propaganda that outlined why boycotting the election actively is better than just staying home and not voting.

An active election boycott is a form of revolutionary action that confronts the capitalist system and its fake ideas of democracy directly. That’s why militants and Communists all over the world also choose to boycott instead of run candidates.

Most of the masses don’t vote as illustrated by the low voter turnout. During the 2014 midterm election only 36.7% of eligible voters in the US cast a ballot and over 63% of all eligible voters stayed at home.

Many liberals and voting-based NGO’s believe that this is due to lack of access, lack of information on where to vote, transportation or apathy. The number is higher during presidential election with 58% of eligible voters casting a ballot but that still leaves 42% of the “voting populace” staying at home during the most “important” election by bourgeois standards.

“Our class can make a way for anything,” the STP-C volunteer said. “We survive under a system that is built on exploiting us and only providing us enough to survive on daily—we could make it to the polls if we cared to.”

During the one-hour picket, one worker who passed by stated that he initially avoided STP-C, who had on red masks. He exclaimed, “I didn’t take the flyer because I thought you wanted me to vote.”

“We been voting for years and nothing has changed,” the worker said as he grabbed STP-C’s flyer.

After standing out in front of the polling site, STP-C volunteers made their way to the Charlotte Transportation Center (CTC), which is more commonly referred to as the “transit.” There, they continued to pass out propaganda and engage the masses on whether they voted or not.

Overwhelmingly, most people that the mass organization talked to did not vote, with an occasional few who did because they said it was their “right” to. To this, STP-C responded, “the right to vote did not bring any significant changes for the oppressed nations, because the things we are allowed to vote on do not change our fundamental condition in class society.” One man stated bluntly that he was a felon and he knew he could vote, but didn’t care to since it made no difference.

Most of the masses were excited to see an organization that was not out at the transit pushing voting down their throats. People were given flyers and ways to stay up to date with STP-C and informed of a much larger boycott set to occur in 2020 during the presidential election.

STP-C deemed their second anti-election campaign a success despite its small character. They noted that nothing begins well-structured and large, everything starts out small then grows out from there.

STP-C firmly believes that by 2020 they will have large amounts of people actively boycotting the bourgeois electoral circus. Communists and revolutionaries around the nation and world have been leading electoral boycott campaigns.

In that tradition, STP-C vows to build up the revolutionary struggle and destroy the electoral illusion. The masses already see the elections as fraudulent. STP-C says their job now is to turn that brewing anger and passivity into outright anger at the system, transforming it into into calculated action against the entire capitalist-imperialist system.